This section is reserved for members on the SITE SUPPORTERS group only. Each supporter can post pics of their bikes for all to view. Standard members can read and reply, but the post author has full control over his thread and can edit, delete & lock at will
Post Reply
74 posts

Thank you Kenthammer. I ordered nc30 full fairings, but shall use the front middle and lower only, infact as you could see I'll fit Cagiva Mito rear tail and nc35 top fairing. Nc30 tank cover was included with the kit, so I'll probably build a bulky aluminum tank to be covered with the plastic, to save some weight. I hope to get it finished before the autumn. Then being me a photographer I'll make a book or a video to show each mod I did in these four years since when I started the project.
Top

Not a big step ahead, but during pandemic time it's... "positive"

the frame has been cut. Next week welding of the new rear frame, radiators and thermostatic valve supports taht has been planned monthes ago, and may be front fairing upper bracket supports welded as well. Aesthetic is really great. I weight it up with magtek rear and front and everything else except T13 tyga fairing kit (http://tyga-performance.com/product_inf ... ts_id=3130) that is 5,46kgs (tank cover excluded that I don't need), it's 152,37kgs, better than I hopped considering it's in full street version with steel rear frame instead of solo aluminum (-700grs), oem flywheel instead of gsxr1000 k5 flywheel (-1043gms), oem nc30 tank instead of aluminum with plastic cover (-1250 gms estimated). So light street with full fairings is calculated close to 154,84kgs. Track version without starting motor, lights, chain guard, semplified wiring loom and switches mirrors and ignition block, side stand, should be around 151,24kgs. Some more grams could be saved with light bolts, a harder coil for the rear shock, upper and lower tyga fork triples (supposd to be lighter than oem nc35 not sure though), airbox/filter, going probably closed to 149kgs. I actually don't know how many hps will come out from the yoshi stage 2 cams I've fitted with carbs modification, I have to test. Some more hp are expected to come from the taoh 4 into 2 into 1 exhaust ( I really hope they made some good calculations during projecting). In this track configuration it is supposed to go more or less like a rgv250 would do, with less handling couse of big rotating masses, but better low to mid range and better high revs and the already good kick in the ass improved by the extreme profile of the cams. I can't see the time I'll put my ass on and push the button to make a test on the alps in the surroundings of my house. 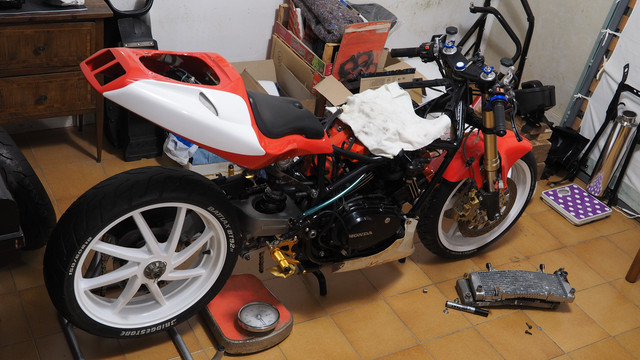 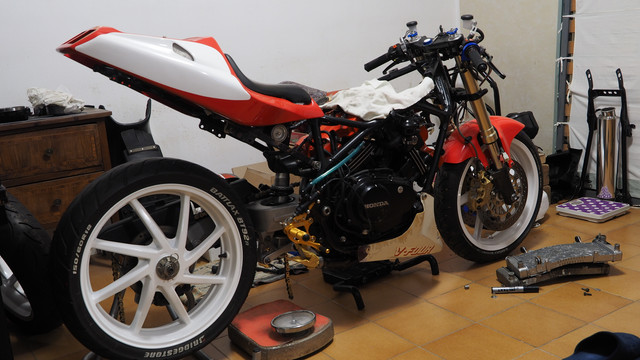 I made a mistake, save on tank would be around 2500gms so 1250 gms less on total weight bringing the street light version to 153,79kgs and track version to 149,9 kgs and eventually to 147 with mentioned works, that makes the vf400f a nice granny...
Top
Post Reply
74 posts