A place to bang on about subjects close to your heart that affect us all as 400cc riders. general banter is rife, however rudeness and abuse seem to be the norm, If a bit wet round the ears best go play elsewhere. Auto pruning of items 31 days and older
Post Reply
10 posts • Page 1 of 1

Hello all,
My second post on here but thought I’d introduce myself. I’m Jack. An engineer from the North west.
I am currently owning 2 ZXR400’s - my H2 is restored and my L3 is a track bike built (almost) from bits. I also have an NC30 that I restored last year after I blew a head gasket.
Aside from them I have a Gsxr1000 K1, a Foxeye Fzr600 and my red S2 that I restored with my dad.
Anyway I enjoy reading all the workshop posts so thank you and I’ve added some pics of the bikes below. 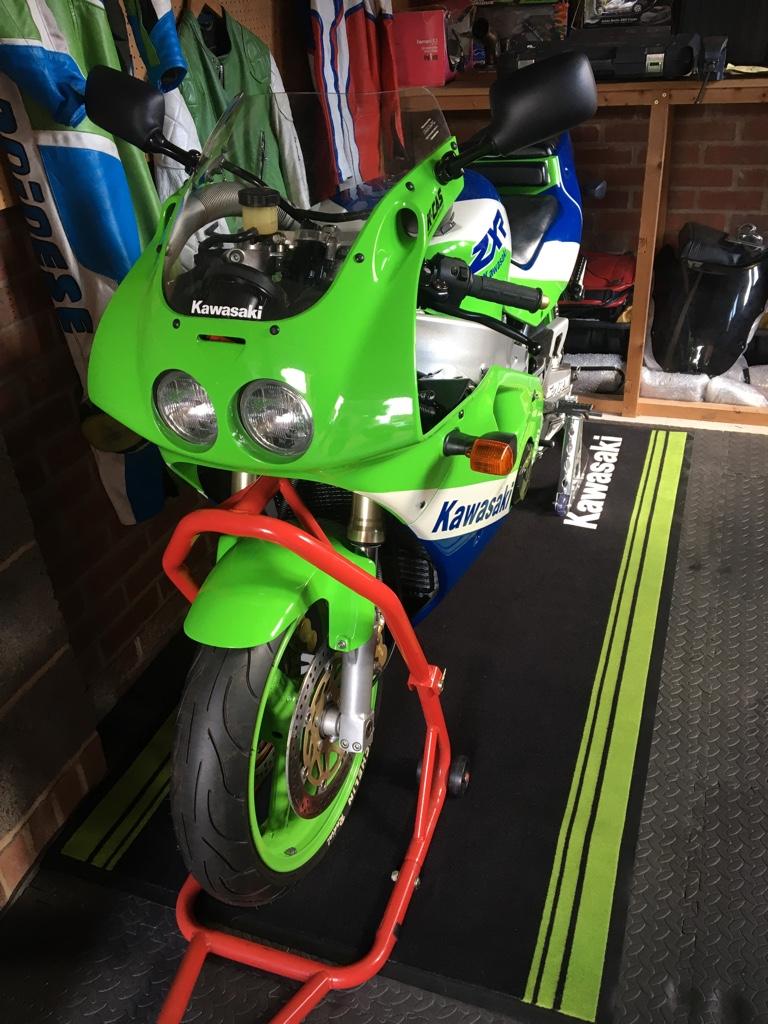 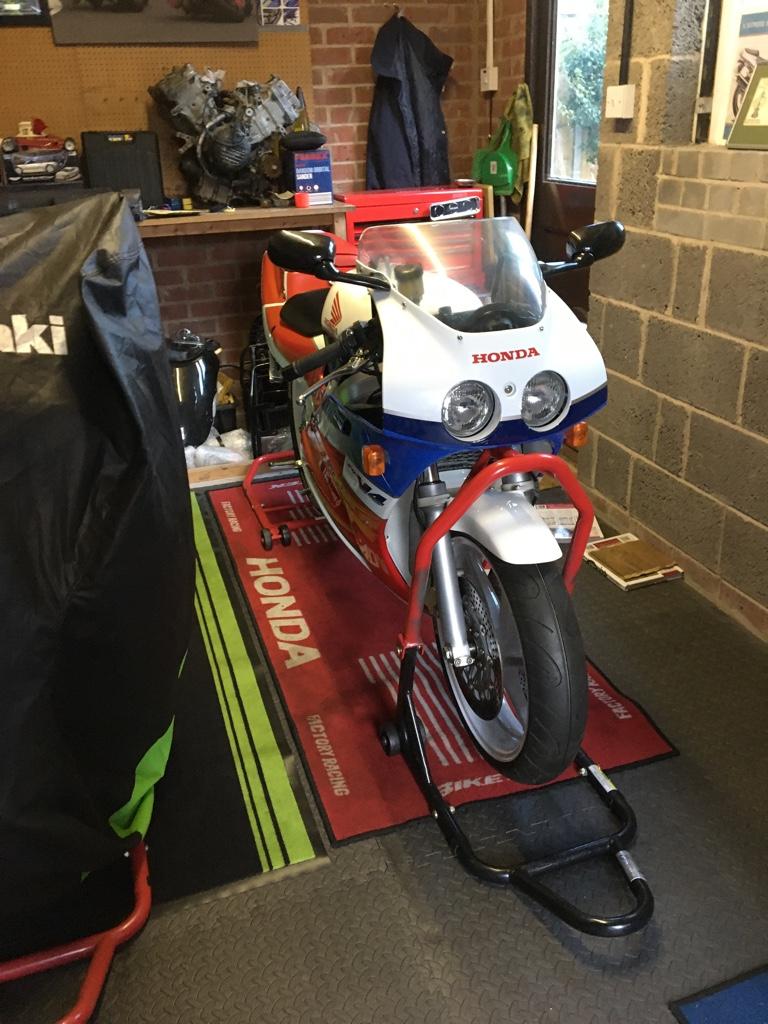 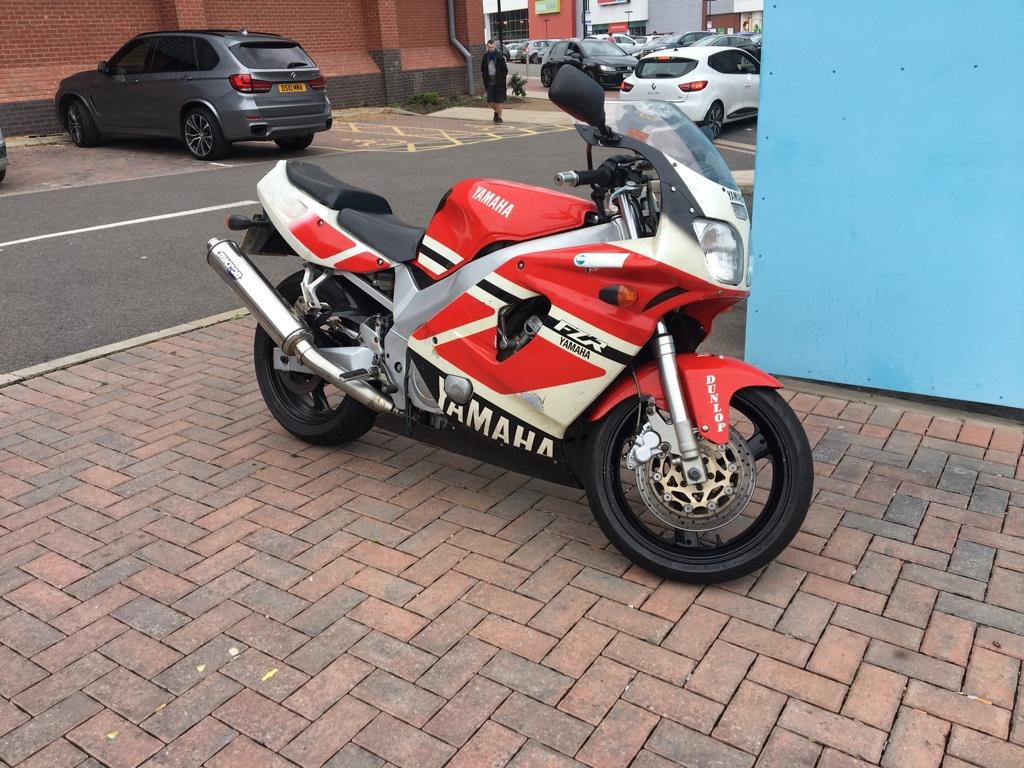 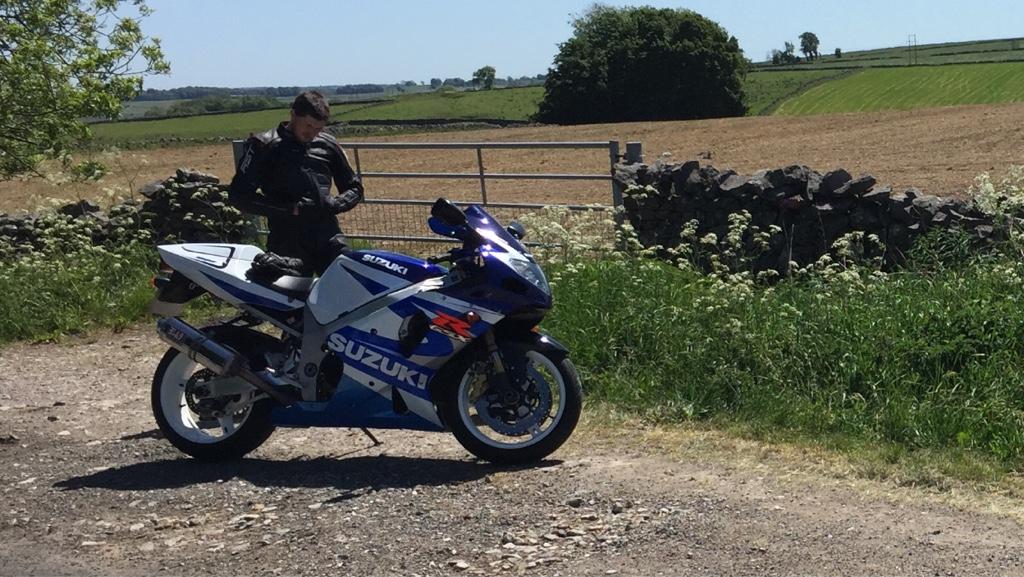 Hello and welcome.
Quite a good collection you've got there, One of each (except for the Hondas) of all of the big four Japanese motorcycle manufacturers.
Top

I’d love to have all the 400’s...
The FZR600 is a really good bike and still so cheap. Especially as everything seems to be advertised for crazy money at the moment.
I had the opportunity to get a CBR400 a few years ago... proper good looking bike. It’s on the bucket list

By the way if anyone knows of any bike meets around East Staffs/Derbyshire I’d be really interested having moved here a couple of years back. Doesn’t seem to be much about! Cheers

Some nice bikes and the pictures suggest you look after them..and so clean. Thanks for sharing. Any particular favourite? If you could only keep one which would it be?
Top

).
I do look after them yeah, the recent lockdown gave me a chance to strip the mess out of my garage and give it a lick of paint finally. I have a flat screen on the wall in there now and my PS2 plumbed in to play TT Superbikes

My shed is packed to the rafters now though

What do you guys have? 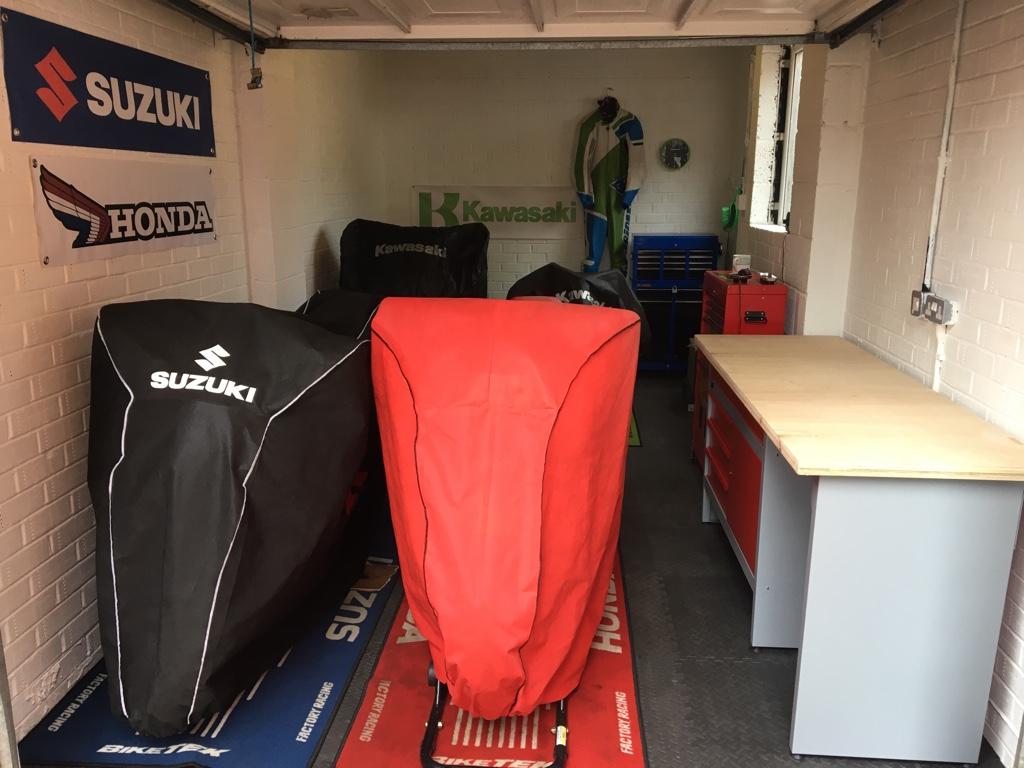 At the moment my garage holds my '94 NC35, which I've owned for around 7 years now, my '90 NC29 (Type 1), owned for 2 years, and a 2017 Triumph Bonneville because I wanted something different, that I knew would start on the button. There's also a 1980 Yammie XS400, which is in pieces and has been for over 3 years. It's a stalled project that was supposed to evolve into a tracker-style bike..maybe one day.
Prior to this lot I've had a range of machines including a GPz750, an immaculate '99 FireBlade, a lovely blue ZXR750 J1 and a '93 ZXR400, which I owned from new but was stolen and a couple of CBR600's. No Suzuki's (yet). If I could only keep one of my current crop it would be the NC35. I've been riding bikes for over 40 years but for some reason I ride more now than I have for a long time.
Top

I love the NC35, my mate had one and I was always trying to buy it off him

Whats the NC29 like? I’ve always considered investing in one but I wasn’t sure.
I get the Bonnie thing... my Gsxr is injected (just) and it’s nice like you say to have something reliable.
The XS sounds cool I’d love a project like that where you aren’t bound by originality and can make cool bits. I was thinking about bidding on a Kwakker GT750 that’s one Ebay atm and making it into a cafe racer...
Have to admit I just did the Nc500 in Scotland and I used my old mans VStrom... got the adventure bike bug now

Quite a selection you’ve had then! Always wanted the 750

Gutted about the ZXR400 though I’d be so upset if one of mine got robbed...

The NC29 is a great bike. It feels more roomy than the NC35 and maybe a little more stable at speed. The '35 would probably take it on the twisty stuff though. They're a fair bit cheaper than the '35 but parts are just as tricky to come by, especially bodywork (other than the tail section..why are there so many for sale but hardly any other panels?). Both my Honda's have been fettled by Graeme France and came back sooo much better in every way.
You said at the start that you are an engineer so I'm guessing you have the skills necessary to keep these older bike on the road, I wish I had! If you'd like to take on my XS project I'd happily let it go (for a very fair price) to a good home, where it might actually get finished

. All the parts are there, a lot of it already assembled. The front end needs building and the biggest obstacle for me is making a new loom. If you're interested let me know.
I used the Bonneville recently to take part in a Land's End to John O'Groats 6-day rally, using mainly minor roads and camping each evening, with the tents set up in advance fortunately. 50+ riders plus support crew, mechanics, medic, chef. It was originally planned for June but got pushed back to September, so the weather was colder than I'd bargained for, with the inevitable rain in Scotland. We covered some of the roads used during the 500. I ended up wearing my thermals 24 hrs a day! Yes, nightime as well. Including my journey down from Cheshire to Land's End I did 2021 miles. It took 2 days to recover and 2 days to clean the bike!
Top

Does Graeme France fettle all the 400’s then? I might have some work for him

How much do you want for it mate? I’m really pushed for space and got so much on... but I have an addiction

We managed to hit great weather so was lucky! Applecross was glorious but my mate who is a new rider had a right wobbler and it terrified him for the rest of the trip so we had a hard job riding slow enough in the twisties for him to keep up (and not smack him up the rear!)
Are you from Cheshire then? I’m from Crewe see

Graeme France specialises in Honda 400's. He's HRC trained and the most meticulous mechanic I've ever come across. He knows these bikes inside out.

The XS400 cost me £1000. I rode it briefly before dismantling and starting the rebuild. Since then I've spent over £1200 on parts, fabrication and paying for things I wasn't confident doing, such as rebuilding the wheels with power coated rims, stainless spokes and new tyres. Fork legs have been rechromed. The exhaust came from the US. Other parts from Germany. Custom seat (made by a chap in Hyde). Renthal bars. Carbs professionally stripped&rebuilt. There's actually an XS400 forum as it's very popular in the US. So it owes me £2200+. I'd take £1200 for the lot. Yes, I'm in Cheshire, just outside Wilmslow.

You mentioned the Applecross. We did that. If I hadn't been over the Rhynose and Hardknott passes as we came up through the Lake District then the Applecross would have been more of a challenge, it was still tricky though.
Top
Post Reply
10 posts • Page 1 of 1